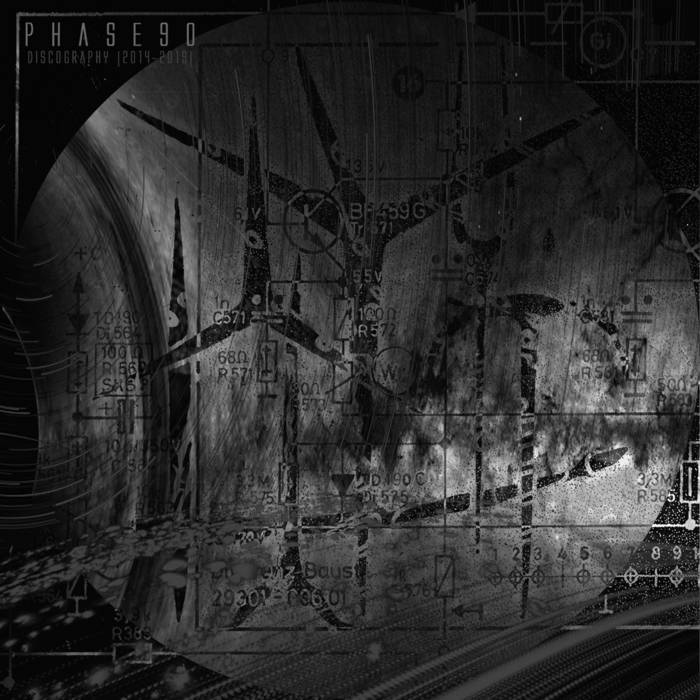 This edition features the entire discography (2014-2019) from echospace's phase90 project which also features the widescreen panoramic submersion of absonia, to the remastered vinyl editions of "infinitati" by Bazza (Abbey Road Studios/Radiohead) @ Alchemy Mastering, London. A blueprint of opiated electronic-darkness existing somewhere in the deepest edges of oceanic abyss.

On the B-side he seamlessly smudges ‘Inzfinitati (Intrusion Remake)’ and ‘Ango (Intrusion Metamorphose)’ into a darker, windswept swell of spirits, like the holiday park ahas fallen into disrepair, the dome’s panes are cracked and the parc is overgrown with foliage like Ballard’s drowned world. -Boomkat


It's the return of Intrusion, Stephen Hitchell's much coveted project presented through the exquisite Echospace cannon. Long term cohort and collaborator of Rod Modell (Deepchord), Stephen Hitchell's "Infinitati" album was a triumph of electronic textures, dub-wise electronix and a melting pot of found sounds. That was released in 2014 and now Stephen has decided to revisit the 1/4" tape recording to further dub-out the original tracks thru the mixing desk, as well as some extra tape splicing and audio wizardry on top - yipeee!

Sinister and dark, the three versions plummet us ever-closer to that impending event horizon that seems to be the Intrusion aesthetic. There's acres of space, but the heaviness of the gas cloud that slowly engulfs the listener is more claustrophobic than spacious. As both a standalone piece or as an add-on to the original "Infinitati" LP, this is truly superb. More impossibly thick electronic-blackness from these dub-techno masters. Prepare to submerge! -Piccadilly


Lurking at your back down a shadowy alley on the wrong side of town, parenthesised by towering obelisks of urban decay - or is that a fenced-off site for a planned block of luxury flats? - is the visual image of Phase90’s cavernous IDM. Infinitati: Intrusion Dubs consists of burrowing dub reworks, taking cuts from Phase90’s original 2015 release and sending them plummeting down a deep well, each crack and pop pinging brick-to-brick for eternity. Burial and The Bug’s one off Flame 1 project charted a similarly dark course, but Phase90’s journey is singularly driven, empowered by this remarkable reimagining. -Bleep


"A reissue of Echospace’s Phase90 project with remastered audio, unreleased material, and packaging handled by Lindsay Todd. Inspired by field recordings from Calvary Cemetery this is haunting music, acidic dreams for those who enjoy a walk on the wrong side." -Fact Magazine (Release of the week)


Is Field recordings from the cemetery may become a leaven of reflection on the fragility of our lives?

Under the banner of Phase90 hiding Stephen Hitchell's latest project, known so far from the business under the names Echospace, cv313 and Variant. As always, this time an American artist combines his music two seemingly seemingly different approaches - technical and metaphysical.

The very name of the project refers us to the famous effect of Phase 90, which in the history of popular music was most often used by guitarists, but also by keyboardists. On the other hand, the basis for recording placed on "Infinitati" became ambient sounds recorded on ... in Calvary Cemetery. How fell combination of warm sound of that effect of funerary registrations?

The album begins in a truly sinister way - from industrial noise that writhing static streak ("Infinitati") leads us directly to the minimalist composition, stretched between dub bass and muffled pulsing techno beats ("Ango"). With time, however, there are tribal percussion ("Dolor"), which combine a deep synth waves of chords heard through a sewage system in the background. ("Terra").

The focal point of the album is a twenty-minute composition "Vinci". This is one of the greatest achievements in the aquatic spatial recordings he's known for. The muffled beats slowly emerge to the fore, leading to a mysterious noises and wheezing - all flashing hypnotic rhythms embedded in the ambient context. This soothing topic of time is the beginning of the next song - connecting industrial electronics inclusions of illustrative "Targum".

The final of the set consists of two recordings referring to the classic school of Jamaican dub. Free bit of the bridge meter brings with it massive bass thumping procession, and on the rhythmic backbone of overflowing waves of dream-like keys ("Passio"). Over time, rhythmic pulses fade, giving way to looped noise, which, like the sound of the receding train, take with them slowly fading passages of ambient emissions ("Quam").

The combination of hot dub effects of the provenance of ominous sounds straight from industrial and raise their rhythm in the style of techno minimalism work flawlessly. This creates a monochrome music sound crisscrossed uniquely, which creates an amazing atmosphere, balancing on the verge of relief and anxiety. If anyone had ever even get that elusive moment of reflection on the passing of connecting time with fascination, the world on the other side of our lives - it is on this album! -Nowamuzyka Magazine


"Steven Hitchell rekindles his Phase90 alias with an absorbing reshuffle of its debut album, 'Infinitati' including unreleased and remastered material. This is arguably some of the strongest material from any of his myriad pseudonyms, mostly thanks to an sort of frayed, agitated approach to his rhythms, preferring knotty, sparking shuffles and delicate dub bounce rather than his patented heavy trodders. The atmospheres too are dealt with a nimble hand, full of organically diffused melody and dusty chain reactions occurring around the sound-sphere with dreamy, elusive quality.

If you've ever needed a place to dip your toes in Deepchord/Echospace's oceans of sound, this is it." -Boomkat


"Insomniacs and nightcrawlers unite, Phase90 has released a big record! We would call it an album, but it’s actually a 2x12”, which is pretty different. It’s like an album for someone who wants to keep it casual and low-key, which works for dub techno stuff, arguably the most low-key genre out there. So yeah it’s this Phase90 guy that’s also Intrusion and Variant - just when you thought that dub techno had loads of producers involved, it turns out that there’s just one. Amazing.

Infinitati brings the murk. The misty, rainy haze of the city at night is omnipresent, bringing in cosmic sounds and imagery, buried radio static that could be obscured voices for all I know, and those sparse, bleak minor chord stabs. You can hear some flanger subtly soaring over the hissy atmospherics in the background, the perfect accompaniment to a space trip or two. Beat-wise, it begins with something even more downtempo than a slow 4x4, before building up to just that after 5 mins or so. This solitary kick is joined by some little fizzy white noise snares on the B side, becoming even more defined as you get further on into the album. 2x12, sorry. It almost sounds like a normal snare on the unreleased mix of ‘Vinci’, a track that has more mechanistic looping than most of them on here. There’re also some minitreats to be found, the last track on the B side being some crazy little ambient clunk piece that shifts between the ears. Loverly.

Oh and don’t forget, it’s all smothered in a lake of reverb and cavernous dub delay. What do you expect? It’s Echospace..."
-Norman Records


"Phase90 is a solo project from Detroit artist Stephen Hitchell, better known for his solo work as Variant and for making up the numbers in dub techno groups Echospace and cv313. Debut album Infinitati is a spacious and haunted piece – dark, ghostly, yet not exactly sinister. This is a great introduction to the aquatic world of echospace as a whole and builds upon the foundations laid down on LP's such as The Coldest Season and the various incarnations of the ever evolving echospace production unit. Perfect winter listening for anyone into The Detroit Escalator Company, Basic Channel or the Modern Love label." -Bleep

"Echospace Detroit's double LP edition of Phase90's project, lovingly remastered by Bazza (Abbey Road Studios / Thom Yorke) @ Alchemy Mastering, London. Features unreleased new material and beautiful silk screened metallic sleeves and art direction from the very talented Lindsay Todd of Firecracker Recordings & House Of Traps. The entire album was bounced down to 1/4" analog tape prior to remastering to preserve the integrity of the masters. This project was deeply inspired by the possessive quality of supernatural textures, field recordings and found sounds conducted at the Calvary Cemetery. There's something quite haunting in the underlying tone of these recordings, an ominous feeling not for the fainthearted. "Infinitati" celebrates the progression of the soul, a concept which stems from metempsychosis. Echospace / Deepchord fans will not be disappointed; these are unfathomably deep textures and pools of sound in which to get immersed, bringing whole new depths to the dub-techno blueprint. Crackles of white noise interference meet with rich plumes of organic bass hum while dub fragments and artifacts litter the mix. This truly is the dog's bollocks for anyone with a penchant for dub or techno production. Unrivalled." -Piccadilly

Featured sounds from Fly Lo and Ahmed Idris, plus Mother Nature hops on to drop off new project